When you hear the word ‘whiskers’ the mind tends to go to images of fluffy and hairy critters, but let’s take a moment to look at one of the strangest, yet one of the most interesting whiskered animals….the Naked Mole-Rat.

It’s difficult to know where to even start with this bizarre little creature. Naked Mole-rats are neither rat nor mole, they fall into the order of rodents. As the name suggests, they are naked, but they do however have sensory whiskers around their snouts, on their tails, and between their toes, these help the molerat to feel their way around in the complete darkness of their tunnels underground. These incredible mammals live most of their lives underground, moving around foraging for root materials and living in a massive burrowing network of tunnels. 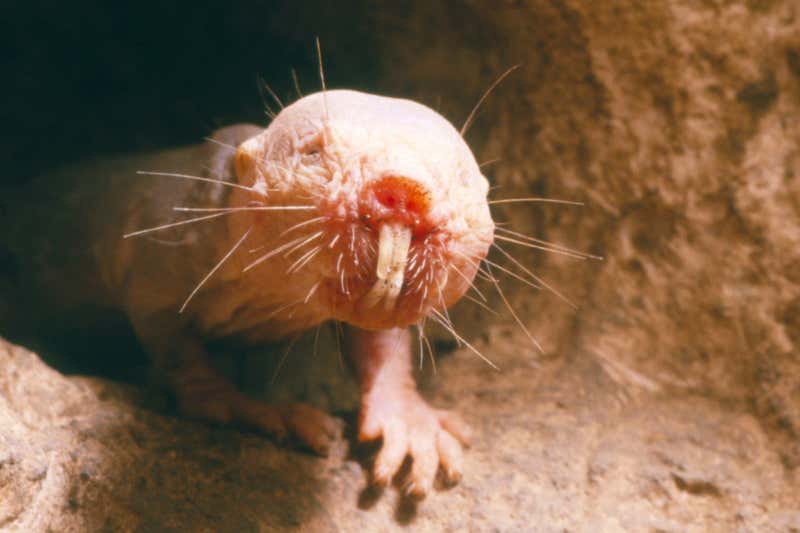 Unlike other mammals, the mole-rat has a social structure much more similar to those of bees and termites, they live as a caste system. In other words, there will be a queen, one dominant female being the only one to reproduce, all the other females in the caste system will automatically become sterile. The queen can give birth to up to 900 babies during her lifetime, she chooses a select number of males as her breeding partners and all the other males and females become workers or soldiers.

The workers will move around the underground tunnel network in search of roots, bulbs, and tubers, digging more tunnels as they go, excavating the tunnels with their huge rodent teeth, the workers are adapted to keep their lips shut while their teets are still able to move, allowing for the digging not to suck too much, they form a long line and dig the soil out to the surface, passing it from one to the next. If they find a food source they will bite into it and drag it back to the main chamber moving backward through the tunnels, over and past all the others behind it.

The soldiers are in charge of keeping the colony safe and will block off entrances into the tunnel system with their own bodies, ganging together to ‘plug the hole’ so to speak, preventing predators such as snakes to get into the tunnel system. With all the loose skin around their bodies, mole-rats can easily squeeze past each other inside the narrow tunnel network and they are constantly climbing over each other and squeezing through narrow pathways.

The Naked Mole-Rat shows almost no effect of aging, which is ironic, seeing as it gets born looking like an old man. This means that they will work just as hard and efficiently at the end of their lives as when they are in the prime of their lives. They appear to be immune to cancer growth, live with almost no oxygen, their body temperature changes as the surrounding environment does and they show little to no effect to a large variety of pain…a real-life superhero granted its naked, but still, pretty impressive creatures non the less.

The Connect Online & Onsite 15 week Apprentice Field Guide course creates a unique opportunity to develop your Career Orientated qualification with more flexible hours by conducting your theoretical training at home followed by concentrated and focused practical training at our Ulovane campus to prepare you for your final practical and theoretical evaluations.

If you are passionate about the natural environment and have a hunger to learn more about all it encompasses, but you have no desire to obtain a qualification for a career in guiding, then this option is for you!

Exceptional Field Guide Training in the heart of the Eastern Cape, South Africa.

My love for nature was sparked at a young age, here's why and how!
YouTube Video VVVMZllMTTBPbjViVWFTZTJzaklfWG1nLnRlTFNqZDlCZlNj
Load More... Subscribe

Happy Sweet 16 Ulovane! In true style you have bee

Everyone who has experienced Ulovane knows that yo

Our Apprentice Field Guides have had another amazi

Do you know what’s special about Mondays? It giv

Accredited by the Field Guides Association of Southern Africa