Recoil, bullets, and gunpowder – An insight into the necessary ‘evil’ of guides with rifles.

Many people are quick to judge and criticize guides and training academies in the industry, saying that we promote the hunting of animals, especially when there is footage involved of someone attempting an Advanced Rifle Handling qualification or Jungle Lane assessment. I believe this is mainly due to a lack of understanding that these perceptions exist.
Hopefully, within this write-up I can give you some insight into why rifles are a necessary ‘evil’ that we as guides need, to be able to do our jobs.

The whole idea that we promote hunting in our industry cannot be further from the truth. If you work through our study materials and go out with ethical qualified guides you will find that one of the first ‘rules’ that Trails guides need to adhere to, is to walk as if you are unarmed, in other words, to never get yourself into a situation you would not have been in if you did not have your rifle with you. “No license to kill” is another rule, where we try our best to instill into guides that, just because you have passed rifle handling qualifications and have been found competent against the needed criteria, it does not give you the right to go out into the field with the perception to shoot your way out of dangerous situations.
As another motivation as to why we don’t promote hunting is the actual Advanced Rifle Handling qualification process itself. There have been minimum distances allocated to each animal that falls into the dangerous game category, which the Trails guide MUST adhere to before being ‘allowed’ to squeeze the trigger on a charging animal. I will try and put this into perspective for you… let’s look at both the quickest and the slowest of the potentially dangerous game and how all Trails guides go about the theory of ALWAYS giving the animal the benefit of the doubt.
Leopard, are the fastest of all the potentially dangerous game, followed closely by the king of the jungle himself, the lion. These two predators reach speeds of 22-24 m/s when charging. As a ‘rule’ we are not allowed to shoot either of these animals if they are further than 10m away from yourself and your guests… that gives you less than half a second from where you are allowed to shoot, to before the animal kills you or one of your clients. On the other side of the scale is the hippo, being the slowest of the potentially dangerous game species, who run at a speed of 10 m/s. Guides are allowed to shoot from 15m or less, thus only allowing for one and a half seconds before the animal will be on top of you.
We are willing to put ourselves in extremely close distances with very limited time frames for us to respond before we will go to the extreme of shooting an animal. The ARH assessment process is an extremely difficult qualification to obtain, where guides are tested against time and accuracy.

Something to remember is that in the court of law, human life will always trump animal life, so a guide heading out on a dangerous game bushwalk takes on a tremendous responsibility. If one of his/her guests gets killed on a bushwalk, the guide can be held liable for manslaughter and end up in jail, being the qualified and responsible person for all the clients out there with them.
In more than a decade spent on foot out in various game reserves, I have never had to squeeze a trigger on a charging animal, with some charges coming a lot closer than the recommended minimum distances. As Trails guides, we spend a huge amount of time studying and observing animal behavior, to once again be able to give the animal the benefit of the doubt, up to literally, the last second (if not sometimes even less).
As trainers, we spend a lot of time and resources to train you on how to protect your guests amongst some of the most dangerous animals in the world and in the most extreme and unfortunate circumstances.
It is a huge privilege to be able to be out on foot being able to tune oneself into mother nature and absorb everything she has got to offer. As guides and trainers, we are responsible for other people’s lives and it is imperative that we are properly equipped and well trained, and have instilled the needed muscle memory to be able to perform competent rifle handling under tremendous stress. 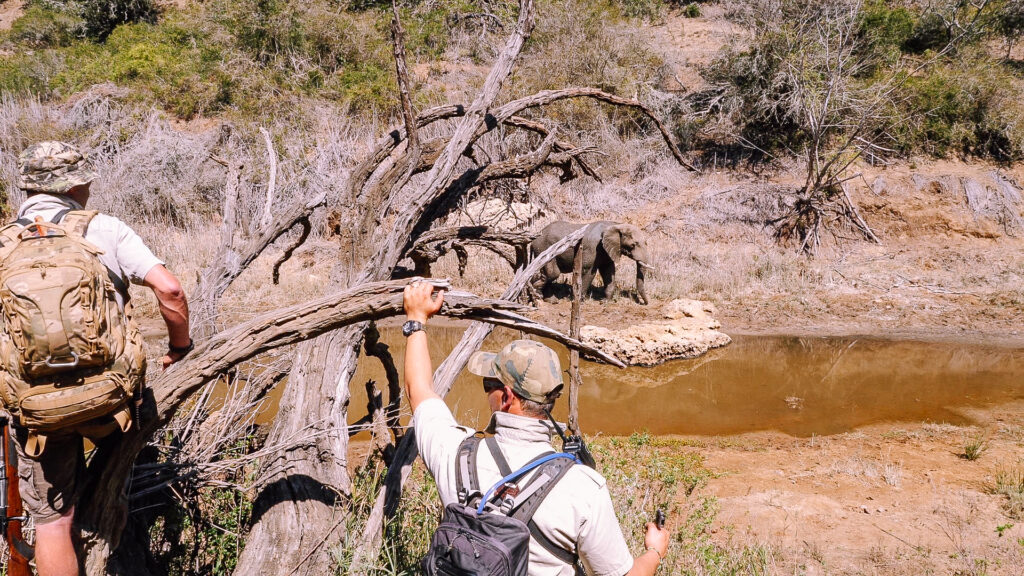 I cannot stress this enough, we don’t teach our students to kill animals, we teach them to save the lives of people they are responsible for. The next time you see a guide standing next to an animal target, or see a video of guides doing ARH exercises, we trust that you will understand the reasoning behind it.
Don’t get me wrong, I know there are unethical hunters and guides out there, there are more than enough reasons for people to dislike rifles and the concept of shooting animals, but at the same time, it is very unfair to make a blanket judgment of all who go through training in the shooting of potentially dangerous game.
There are a lot of us out there who are purely trying live our passion, which at the end of the day is to teach people more respect and appreciation for nature, and yes, to be able to fulfill this responsibility as an ambassador for nature we need to be able to protect those we try to teach and convert.
All we ask is for people not to be too quick to judge our training and to first consider the reasoning behind our methods. Nobody wants to be operated on by a doctor who is not fully competent in their field, and nobody should want to go out in nature amongst these majestic, yet very dangerous animals with someone who is not fully equipped and competent to save their lives if the need arises.