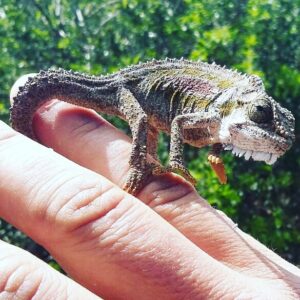 We all know about chameleons, but very few people grasp the iconic value of chameleons to Africa and particularly South Africa.

Our namesake, “Ulovane” is the isiXhosa word for Chameleon. And what a fascinating creature indeed! 15 out of 19 chameleon species in South Africa are dwarf chameleons, that are endemic to South Africa! The endemic species to our region is the Eastern/Southern Cape Dwarf Chameleon. It’s relatively big for the dwarf species, growing up to 14cm in length!

Almost half of the 200 known chameleon species live in Madagascar – 44% of them; and 10% of the world’s chameleons are proudly South African!

Chameleons vary wildly in size, with the smallest species on record discovered in 2012, the ‘Brookesia micra’, with adults reaching only up to about 3cm in length; to the Oustalet and Parson’s chameleons, each of which can reach a length of 69cm.

Chameleons are solitary animals and only come together to mate, and even then, the courtship is not lengthy. Mostly we have all learned that the colour change is only for a camouflage strategy, but it serves another purpose too – the attraction of a mate! Chameleons are highly territorial, so competing males can be seen to battle it out with a colour-change face-off. Females too, however, try to impress when they’re searching for a male, for example, the female common chameleon displays bright yellow spots when she’s ready to mate! But low and behold, if males try to approach her when she has already mated, she will hiss and display a dark blue colour with yellow spots for vivid contrast. On the note of little ones, some chameleons lay eggs while other species give birth to live young (our endemic Dwarf chameleons being one such example).

Colour changing however also serves as communication between individuals, and the very useful purpose of temperature control – light to cool down and dark to absorb warmth. How exactly do they change colours? The name of the game is reflection! There are two superimposed layers of crystals embedded within the chameleon’s cells. Altering the position of these crystals allows the chameleon to reflect different shades of colour.

As for their famous characteristic of ‘googly eyes’, they are an amazing adaptation as the chameleon can move EACH eye independently of the other, as much as 90° vertically and 180° horizontally! Once locked on to a target however, they switch to stereoscopic vision to help with depth perception and then out comes that phenomenal tongue to catch their prey!

The ultra-sticky tongue is ‘fired’ out the mouth by an ingenious elastic catapult-like mechanism. Some chameleons have tongues 2.5 times longer than their bodies. In this department, the smaller critters seem able to shoot their tongue out more rapidly and powerfully than their bigger cousins. Unlike many other lizards, chameleons cannot regrow their tails if they lose them.

Even though we have learned all these amazing facts about chameleons, there is still a lot we don’t know about them!

It is common in the insect world for a pupa to have a longer life span than the adult itself, but it is quite bizarre in the reptile world and one such chameleon, the Labord’s chameleon, does just this. It spends more time in the egg than hatched out of it!

Animals never cease to amaze us!

The intriguing chameleon with its unique adaptations was the obvious choice of icon for Ulovane Environmental Training. We too have exceptional all round awareness and the ability to adapt and change under different environmental situations, which ensures that we keep our focus on the target which is to offer exceptional field guide training. We have grown steadily over the last 14 years and are proudly South African. – Schalk Pretorius Owner Ulovane Environmental Training